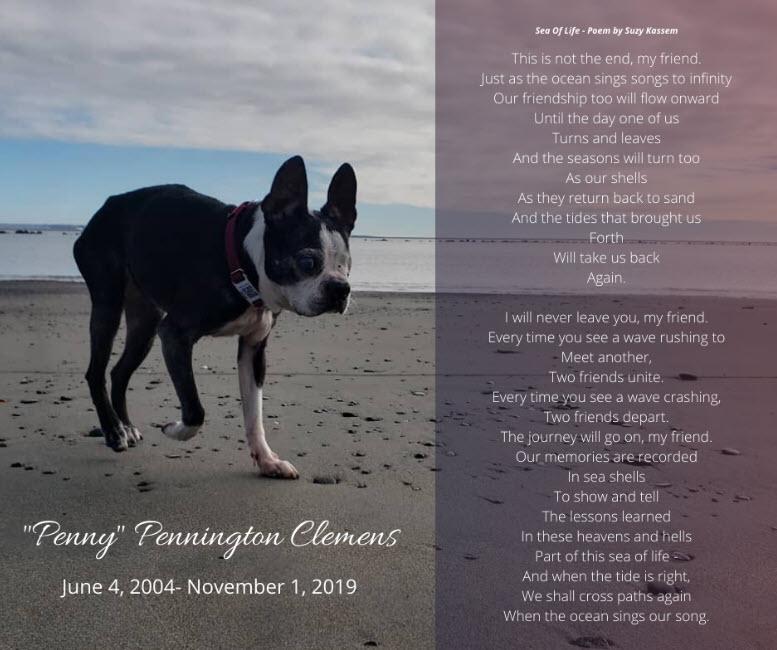 I said goodbye to her today.

Perhaps she would have lived naturally for a few more weeks, or even months, but it would not be a peaceful passing, but rather a painful, scary and drawn out one, filled with even more medication and vet visits, and I just didn’t want that ending for her. So Penny passed away today, in my arms, surrounded by the rest of her pack, in her home, in her favorite bed (appropriately designed with black, white and red sugar skulls), peacefully and without pain and fear.

My husband and I always joked that Penny would not leave a beautiful corpse, because she lived life fully and had a multitude of scars and ailments to prove it. When we dressed her a few years ago as Frankenpenny and then this year as Darth Penny for Halloween, they were very fitting costumes -- one of our PetHub employees actually did a poster featuring Penny as Darth Penny. My brother told me earlier this week when I let him know we were saying goodbye to her today, that he had been convinced that Penny was going to be the world’s first cyborg-dog and live forever -- if only that were possible, huh? 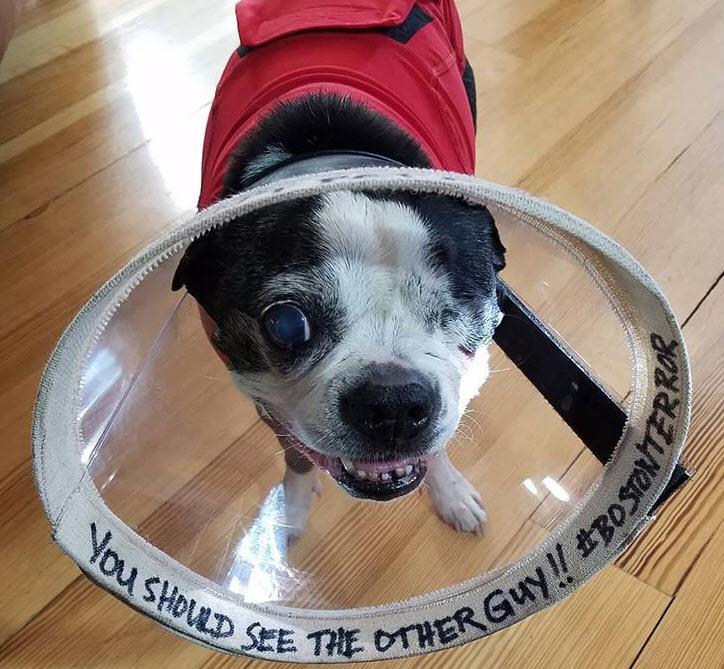 I tried to count up how many surgeries she’s had, and I think she had least 7, not counting her spay procedure when she was young or teeth cleanings/extractions. She had 3 separate benign tumors removed (including one that we weren’t going to remove until a big, snarky German Shepherd bit her there and the tumor became badly infected), a surgery to have her muzzle repaired (post fur sibling fight that Penny clearly lost) and she  had at least three surgeries on her eye (one to repair damage after being bit by a fur cousin Rottie-mix whose food she was trying to steal), one when we finally, 5 years later, removed the eye because of continuous complications and once more to remove the prosthesis eye that never really “took” -- in fact, that wound, due to other health complications, still hasn’t fully healed. But even in the cone of shame, our fierce little warrior BT endured, and just kept coming back for more trouble and Boston Terror craziness.

And then there are those other ailments: Penny had a failing liver for the last year or so (the last few weeks, the disease’s symptoms have really started to show), her bladder and kidneys were continually getting inflamed and infected (she’s had to wear a diaper for the last 1.5 years due to incontinence), her “good” eye had a severe cataract so she could barely see, she was losing her hearing (or at least had extremely selective hearing) and had a heart condition that complicates surgeries so much, that at her geriatic age of 15+ years, we had not had her teeth cleaned under sedation for the last 2 years, though they desperately needed to be. 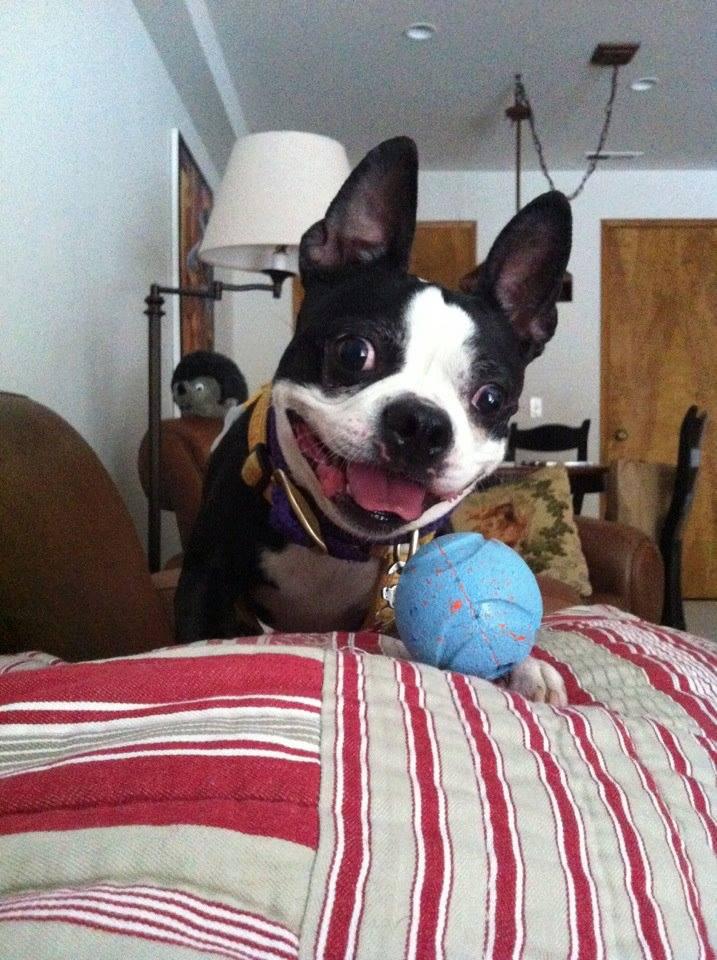 But all that pales to the Canine Cognitive Dysfunction. She was diagnosed with CDD over 2 years ago and it was the deciding factor in why I decided it was time to let her go today. We were lucky that through a pretty assertive approach to medical supplements, including CBD, and a change in her food, we were able to slow the decline, even though we still knew “good ol’ Penny” was slowly leaving us. For what it’s worth, Purina’s Bright Minds food gave us more time with Penny, of that I’m sure, and I would recommend that particular Purina food to any dog parent. The ironic thing, I suppose, is that Penny actually got SWEETER as her cognition declined. Anyone who had met Penny prior to about a year and a half ago would remember her as a fierce, often scary, dog to meet for the first time (more about the “whys” of that in a bit). But folks meeting her recently have been shocked to hear that she fully embraced her Boston “Terror” moniker and took a lot of patience and ritual to get her to trust you enough to let you into her pack. Those that had been accepted to Penny’s Pack always felt very honored (or maybe just relieved?). But if you only met her recently, you would have thought she was your typical, friendly, sweet Boston. Uh, yeah...no (again, more on that later). 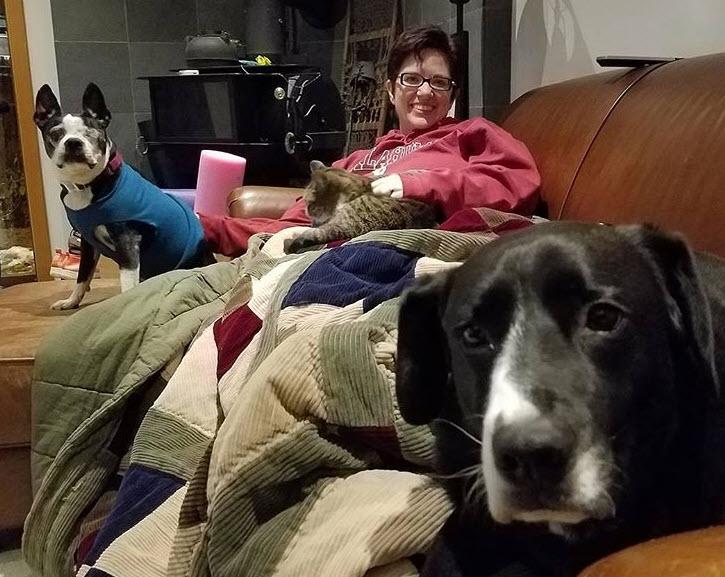 When Penny recently started to favor her “bedroom” (our main floor guest bathroom) over our company, we began to realize the time was nearing. We counted “good days” at that point. A few months ago, we could still lure her out, get her to join us on the couch for cuddles in the evening, and come outside to at least chase her brother Ullr, even if she no longer wanted to fetch her beloved ball. But we had a big change in our home 3 months ago, and I’m afraid it rocked Penny’s world a bit too much. We brought our tiny human home, our son, and though Penny was incredibly sweet in her limited interactions with him (and he’s a super chill baby, by the way, who loves attention from his fur sibs), she has chosen to spend less and less time with us, even with me. We haven’t had many “good days” lately, just some “good moments.” This last week, knowing it was her last, I tried multiple times to get her to sit with me or play. She still recognized me, but she longed to be back in the comfort of her little room, snug in her bed, so I’d not forced her, but rather sat on the floor next to her, just to spend a bit more time. 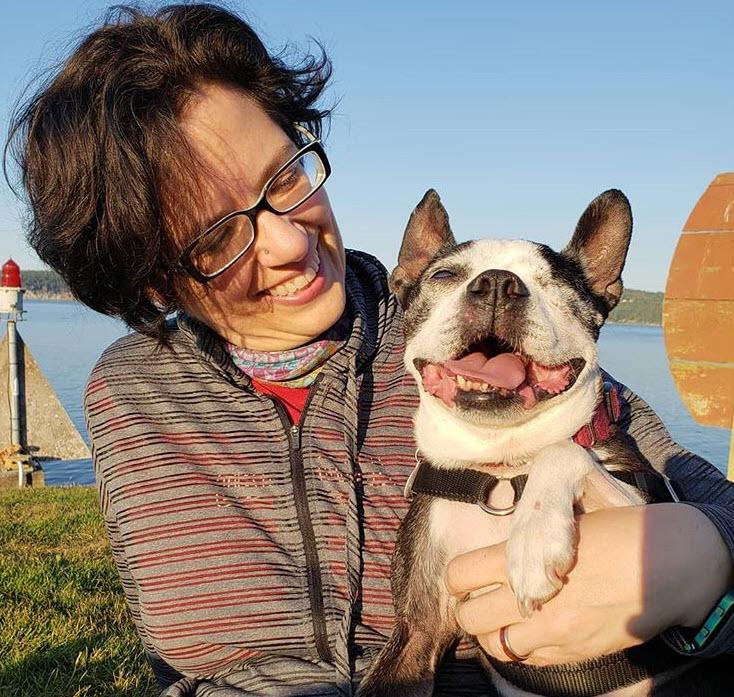 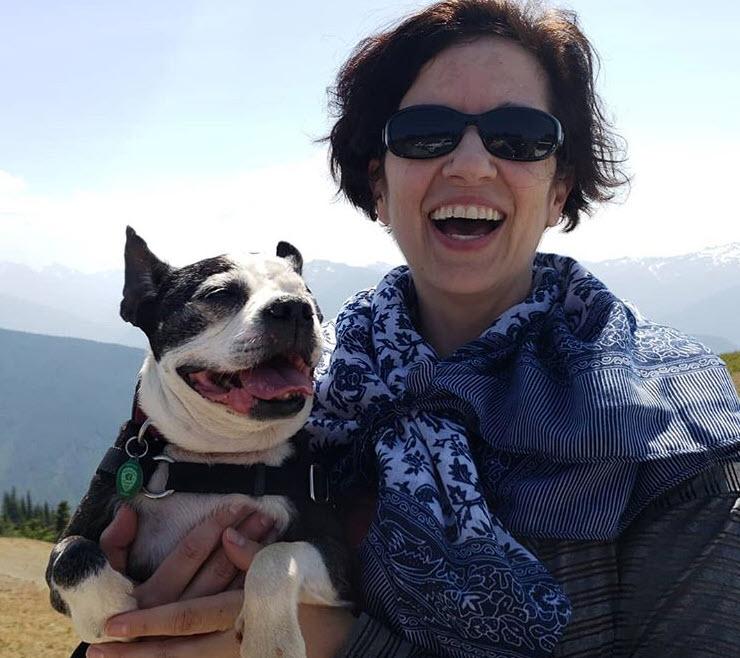 Her episodes of staring at walls and shaking uncontrollably had increased, long periods of wakeful, shaky pacing in her little “bedroom” space in the middle of the night, and she had lost almost all interest in doing any of the things she loved doing, except maybe eating -- she still scarfed down her breakfast and dinner!  When we took her to the beach last week, she didn’t roll in stinky beach stuffs even once...and that truly was one of her FAVORITE things to do, trust me. And in the little cottage we stayed, she still sought out a corner of the bathroom for solace. Then, late last week, while shaking herself full body style as BTs are want to do, I watched her back legs go out. She struggled for 15 seconds or so, dragging them behind a bit, before finally getting them back under her, and gingerly continuing to walk to find a perfect spot to pee. So I knew it was time, even though the idea of losing her devastated me. 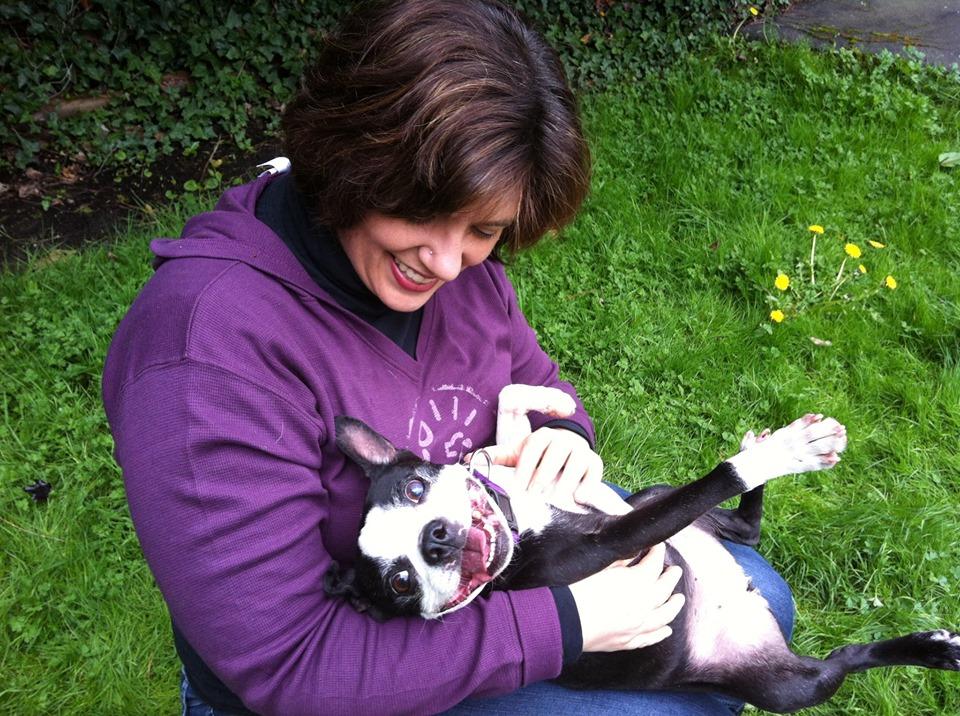 Penny just wasn’t a beloved pet or fur kid for me. She was my soul dog. She was wicked smart, fiercely loyal and deeply loved those in her pack, scrappy, stubborn, funny, goofy, loved sports and play, she was sweet when she wanted to be, but didn’t take any bullshit, loved to eat (even fruits and veggies!) and she was ready for any challenge -- even when it was not advisable (remember the GSD and Rottie encounters?).  She loved to run, to fetch, to explore the beach, to hike, to camp, to cuddle on the couch watching movies or howl with delight during football games. She was basically me in a ridiculously cute dog form. She always brought me, and those who loved her, such joy, laughter and love; such fierce, dedicated love. The memories I have of amazing adventures with her fill my heart. I have come to love the breed, too, so much that I will have Boston Terriers again in my life. Not right away, as I need time to heal, and raise a baby, but I made a promise to my son last night that he would have BT buddy in the future, so there’s that -- can’t break a promise like that, right? 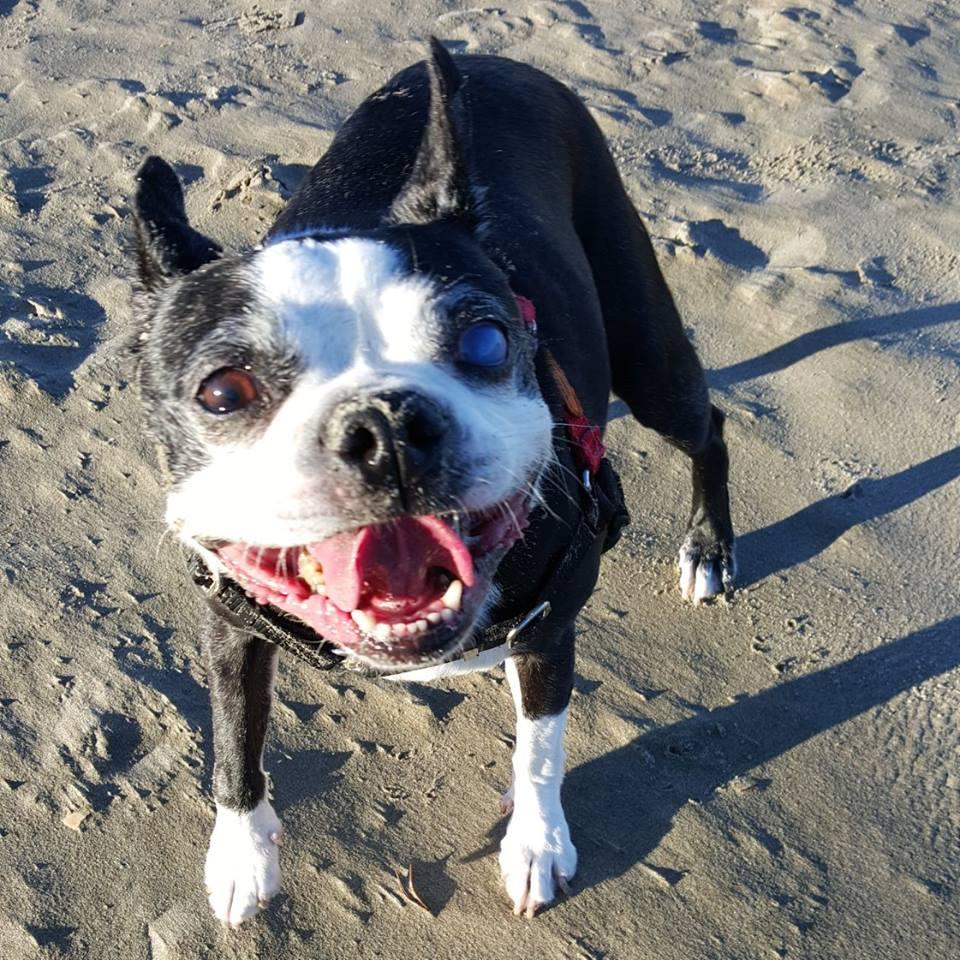 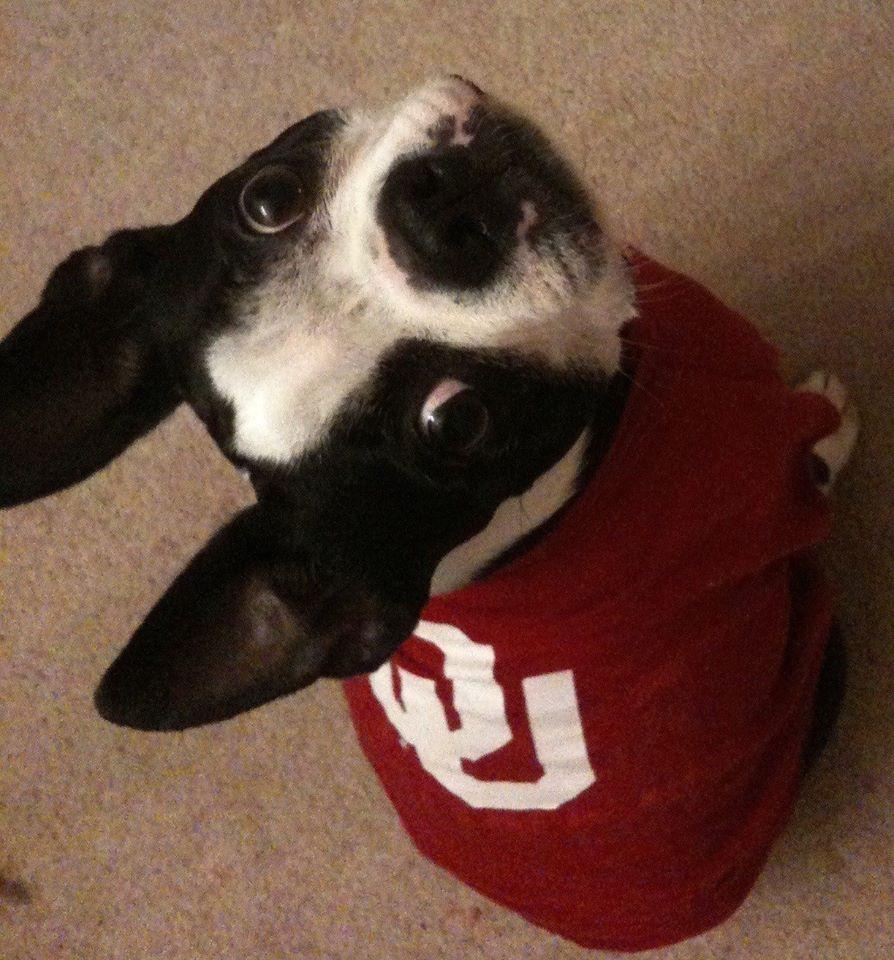 She and I also had a deep trauma bond that all who know us understand. When we were apart from each other it was very apparent, particularly for Penny, who got very depressed (and, I, too, deeply struggled with anxiety about her when I was on the road). You see, the first 4.5 years of Penny’s life, she spent with me and my ex-husband. I won’t go into the particulars, but suffice to say, he was not a kind person, particularly to Penny. In fact, I named her “Pennington Joe” after his two favorite football quarterbacks. I wanted him to accept her and treat her well, because he really, really did not want a dog, and I insisted on getting one, because dogs have always been a huge part of my life. He was kind enough to her at first, “lucky she was so damned cute,” but that, like all of his periods of kindness, did not last very long. His treatment of her was one of the two things that finally gave me the courage to leave him, even though I was terrified. Her strength, her fierce protection of and deep love for me through that darkness saved me, I believe, and certainly made it possible for me to heal. It took years of therapy for me and training for her to help both of us get over that marriage...and a big part of the healing for both of us was the kindest man I’d ever met, Tom Arnold. 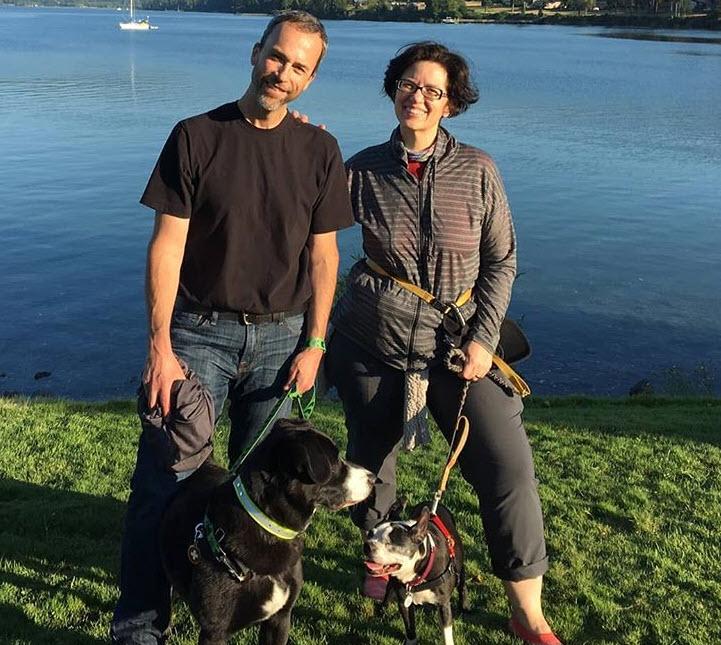 I won’t go fully into all that Tom has brought to Penny’s (and my) life, but I will say that his kindness and patience to work with her and a trainer so that she would trust him so soon after being in a horrible situation (you see, she was “Cujo” around any man that tried to come near me) made me fall in love with him. And when, just about 4 months into our relationship, he said, “Hey, I’m thinking about quitting Microsoft so I can start a company to help pets and their people,” well, that kinda sealed the deal for me.

So, at the age of 5, Penny, whether she liked it or not, became the face of PetHub (a shared spotlight with her fur sib, Ullr). Her cute Boston mug modeled ALL the new PetHub tags and collars, was in many magazines and online ads, PetHub educational videos, and countless social media posts. There is a HUGE Boston Terrier on all of our trade show backdrops because of Penny. She’s got quite a following of fans that I know will be devastated to hear of her passing, though I’m sure they know, she lived a rich and full, and much loved life, particularly these last 10 years with Tom and the PetHub Pack. 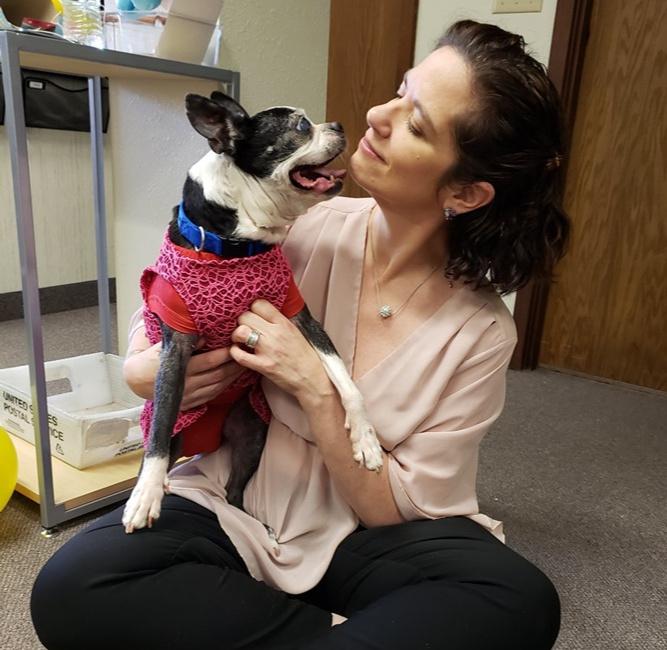 Bat Girl. Penny the Boston Terror. Frankenpenny. Darth Penny. Pencil. Pen-sicola. Pen-itentiary. PG. Goodbye my love. I will miss you more than I can possibly express. Thank you for being my rock and my inspiration for these last 15 and a half years. Rest in Peace, my sweet Penny Girl.

-- I wrote this a few hours before the vet actually arrived, because I knew I would be incapable afterwards. I felt the need to write a memorial for her and share it among my friends and family, and even strangers who know Penny only through PetHub and social media. Those who have bonds with their fur kids as I do will appreciate it, and those who don’t get it, well, this was never for them anyway. Much love to you and your own packs. --